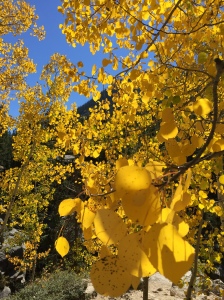 Tim Cahill once said, “a journey is best measured in friends rather than miles.” Trips just down the road can bring new color to travel. Especially if you make new friends along the way. My boyfriend Jay and I packed the car the last weekend in September for the four-hour drive to Aspen. I knew the colors would be optimal (we pickd that weekend for a reason), I had no idea they would leave me in a state of awe. There are several different ways to experience Aspen. It is home to some of the state’s most phenomenal campgrounds as well as hotels, restaurants and shops. So we decided to do it all.

Not All Who Wander Are Lost

All of the reserved campgrounds were full, but we opted to try our luck anyway. The clock on the car dash read 6:49 a.m. as we pulled out of our Boulder driveway. We took our time driving up – heading through Leadville and across Independence Pass. By 10:30 a.m. we’d found our best campground of the summer at Lost Man Campground about 15-20 minutes outside of Aspen. Nestled along a small creek, we set up camp, which includes my favorite camping accessory: a hammock. We got an early start on Lost Man Trail, and were pleasantly surprised to find it mostly deserted with the exception of a few local Aspen couples. As a reward for a successful 7-ish mile hike, we settled in on the hammock for happy hour  and an audio book (a camping tradition).

“A journey is best measured in friends rather than miles.” ~Jim Cahill 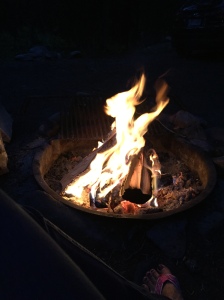 ampground became increasingly packed. “Wow, that sucks,” the ever empathetic Jay said as numerous cars pulled in the campground at sunset only to find this campground, just like the rest, were full. One man, by himself, struck up a conversation with Jay. Traveling alone, he (let’s call him Half Moon Bay) wasn’t sure where he would stay. We decided to share our space. There was plenty of room, and his sole goal was to get a few photos in with the last hint of light and turn in for the evening. We invited him to join us at the fire upon his return for a night cap, and were pleasantly surprised when he did.

HMB, in his late 50s early 60s began to share his life story. He regaled us with unbelievable accounts of driving a VW Bus from tip to tip of South America in the 70s. A former flight attendant for PanAm, he continued to wow us with tales from the glory days of airline travel. HMB, Jay and I both agreed, lived a life we want to emulate. We found HMB so fascinating, we didn’t even notice we’d used up all of our firewood and the embers were dying out when we finally climbed into our tent. “Jay,” I whispered as he zipped up the tent, “what if everything HMB said was a tall tale to take advantage of us? What if…,” I didn’t finish my sentence. The next morning, before the sun rose, HMB left a note and cash for almost the full amount of the campground. We’d made a new friend.

High in the Sky

l colors continued into the town of Aspen. Note: I’ve always wanted to go to Aspen, but worried it may be too pretentious for my taste. Instead I found it to be a quaint mountain town with insurmountable sophistication and charm. We checked in to the Sky Hotel mid afternoon after a short hike up Aspen Mountain. Our first task: hit the pool. The Sky Hotel, according to locals and regulars alike, the best pool vibe in Aspen. It didn’t disappoint.
Impeccable bar service to accompany the pool and hot tub that overlook Aspen Mountain, we happily enjoyed several cocktails in and around the pool area, meeting other guests who were surprisingly for Aspen, mostly in their 30s and not surprisingly, mostly from Denver. A few notes on the Sky: it’s under new ownership and will be closing next year for renovation, but if you happen to make it out before as well as the pool area, you’ll enjoy nightly happy hours in the lobby, a great atmosphere and awesome jungle inspired robes. All well worth the trip in my opinion. A few additional musts while in Aspen, regardless of the color of the leaves: we ventured over to the historic Hotel Jerome for happy hour, Matsuhisa for sushi (we sat at the bar, and the bartender knocked it out of the park with every recommendation) and Aspen Over Easy for brunch. 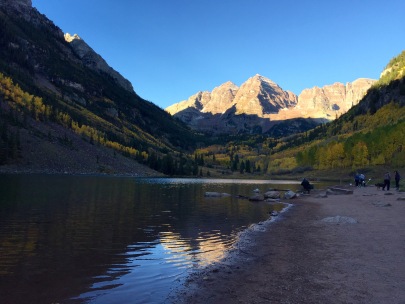 One of the biggest tourism draws to the Aspen area is Maroon Bells. It’s such a popular attraction, that after 8 a.m., the road to Maroon Bells closes and is only accessible by bus. Jay has made a yearly pilgrimage to Aspen in the Fall, and recommended we drive up to Maroon Bells at 6 in order to beat the crowds. At 5:30 a.m. we hit the snooze button once. Twice. Three times, before we jumped up in a fury to find all the warm clothing we could and get out the door. By the time we reached the main road to the Bells at 6:20, they had already closed the road to tourists. Recommendation: don’t hit snooze. Seeing the sunrise over the Bells is worth it! By the time the shuttle service began around 7:30, the light was less than to be desired for. The crowds even less. The last two weekends in September are the busiest time in Aspen, and the crowds were proof. Were the Maroon Bells magical? Of course. Could it have been better? Yes. Reminder and lesson learned that it’s so true: “You can sleep when you’re dead.” Sigh. Next time.

Where are some of your favorite places to experience Fall? I’ve seen Fall just about everywhere, but Aspen was truly a unique experience. I highly recommend a trip! Cheers! 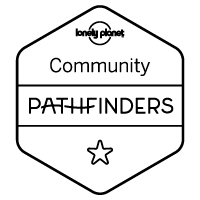