First of all, wunderbuggers, I know I’m overdue posts on Nepal. I opted to unplug and was physically separated from my beloved  macbook pro for almost three weeks! Even though I’m now in Bali, Indonesia, I promise to hammer out a three-part series on Nepal during the next few days.

Back to where I left off last time we all met, while in Cape Town, Jay and I debated three different options: go home (this one is tricky; we don’t actually have a “home” to go back to. Usually when we discuss this, we’re referring to just returning somewhere to the U.S.) OR go to India or Nepal. We hit South Africa during “shoulder” season, which is on the cusp of being offseason. Translation: temperate (great) weather, low prices and few tourists. In India, we would be slightly past the shoulder season, but in Nepal, we had a great chance, especially with the current effects of climate change, to hit the sweet spot. We chose Nepal and in my opinion, made a grand choice.

At age 8, my family sponsored a Nepalese family with kids my age. We spent a lot of time sharing our cultures with each other (them cooking traditional Nepalese meals for us, such as dal bhat and them joining my family in Hays, Kansas for Thanksgiving.) They were my first introduction to the subcontinent. I knew that someday, I would have to go there for myself. For Jay, his college apartment was littered with posters of the Annapurna Circuit. He was hungry to finally trek through the Himalayas.

We arrived in Nepal via the low-cost carrier, Fly Dubai. We stayed in central Kathmandu at the Yak and Yeti – a resort hotel steeped in history. If only those elaborately carved pillars, bed frames and walls could talk, I’m sure they would tell stories of a very romantic time in Nepal’s past when the city was still small, pollution was less and the Himalayan 8,000-meter peaks were only tackled by the elite of the elite of the climbing world. 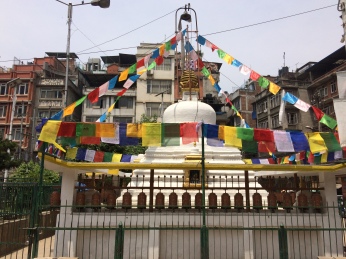 Most of our time in Kathmandu was spent researching how we would tackle the Annapurna Circuit and purchasing the rest of our gear (post to come). However, we did carve out some time for sight seeing. We knew we would be limited on our temples – it’s only a year after Nepal suffered from two major earthquakes – and many of them are in ruins. We took off on a walking tour nonetheless, starting in the shopping district, Thamel, and followed Lonely Planet’s guide from one temple to the next until we hit Durbar Square. The earthquake hit Durbar Square especially hard. Once ornate Hindu temples are now only a large pile of rubble. The government pledges that each temple will be rebuilt, but the young government has already struggled immensely with basic relief efforts, it makes it hard to believe the temples have a chance any time soon. Not to mention, the threat of future earthquakes is a real concern. In almost 30 days in country, Kathmandu experienced at least four earthquakes averaging around 4.5. 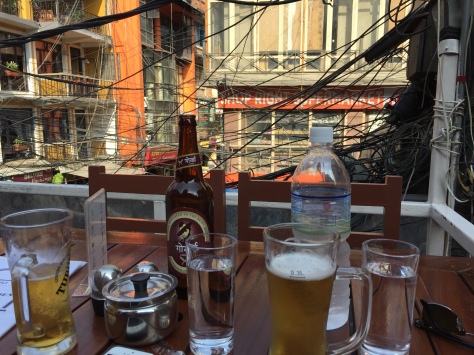 After last year’s earthquake, Kathmandu’s population exploded. Nepalese poured into the city after their villages were completely decimated. It’s loud, polluted and over populated (nothing compared to Kampala, Uganda, or other large, third-world capitals, for reference). Yet somehow, it will always have a special place in our hearts. Mostly because of the people. Will I be back to Nepal? Absolutely. You’ll see in my next two posts how enchanting the Himalayan region is, which is a draw in itself, but a few days prior to trekking, entrench yourself in a few days of Kathmandu. 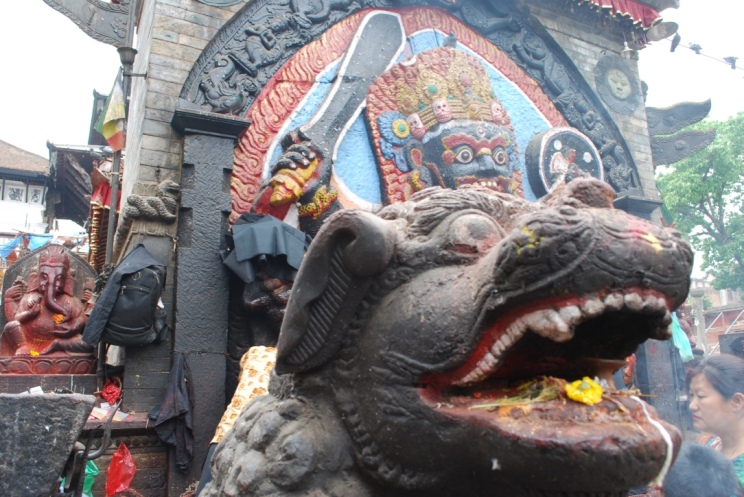 Check back in a few more days – the pics of the Annapurna Circuit are a-mazing. And we had some good times in the lakeside town of Pokhara as well that I’ll be sharing with you. Cheers, and have a safe and happy Memorial Weekend!

First time cross country skiing ✔️
First time hosting Christmas dinner was a raging success thanks to my personal chef @mountainfanatic6
Getting into the Christmas spirit with my bugs (just missing Sara & Ryan!) 🎄❤️
Beautiful day yesterday at the Botanic gardens on the east side of the island #barbados🇧🇧
Gratitude. It’s a word I’ve been struggling w a lot this holiday season and to be honest, thru the last couple of years... However, after 3 miscarriages, 1 round of IVF w no viable embryos, and a current IVF cycle that isn’t looking very promising (while nursing an odd sun rash over most of my body) I find myself looking for gratitude in the small places: a sunset, a morning stroll on the beach or a good meal. And suddenly those small moments of gratitude lead to recognizing the larger things I’m grateful for: my amazing husband, our supportive family and friends, and lastly, the ability to keep trying (in a place like Barbados nonetheless!) to grow our family even tho the odds still don’t seem to be in our favor. Through it all, I’ve learned that it’s the pursuit of gratitude during the hard days that can make a day great. @mountainfanatic6 #infertilityawareness #infertilityjourney
Priorities 😆
Follow thewunderbug.com on WordPress.com
%d bloggers like this: