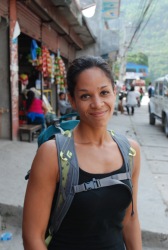 My head hung low as the wind whipped my hat from my head. The morning had been full of “Nepalese flat” terrain – ups and downs – and I was struggling to keep up. I found myself wondering, what am I even doing here? I’d always wanted to come to Nepal, but hiking the Annapurna Circuit was Jay’s dream not mine. A culmination of months on the road and the loneliness I was feeling even though Jay and I were always with in eyesight of one another was starting to chisel away at me. Moments later, I refocused my attention on my surroundings. You’re in the Himalayas, Lins! Pull yourself together. A few hours later, the wind died down and the Nepalese flat seemed to transform from tiresome to rejuvenating. We would also meet the first of many friends along the trek trail. Over the next 13 days we would sip tea, break bread and toast the day with fellow trekkers from Canada, Spain, Brazil, Germany, Israel, Belarus, Australia, Czech Republic, Ireland, France, South Korea, India and Japan.

I found myself trusting my feet more and looking up at the mighty Himalayas around me rather than watching my feet. I would come to find tranquility in the routine on the trek trail: hike, tea, hike, lunch, hike, tea, dinner, read (Jay and I would nestle into our sleeping bags and listen to audiobooks every night), sleep, repeat. And after two years, the trek trail finally helped me beat insomnia. Trekking, I’ve come to believe, can expose your greatest weaknesses and almost seconds later reveal strength you didn’t know lived within you.

Why the Annapurna Circuit? 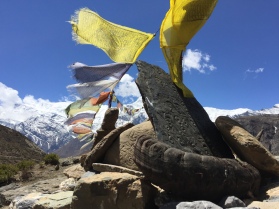 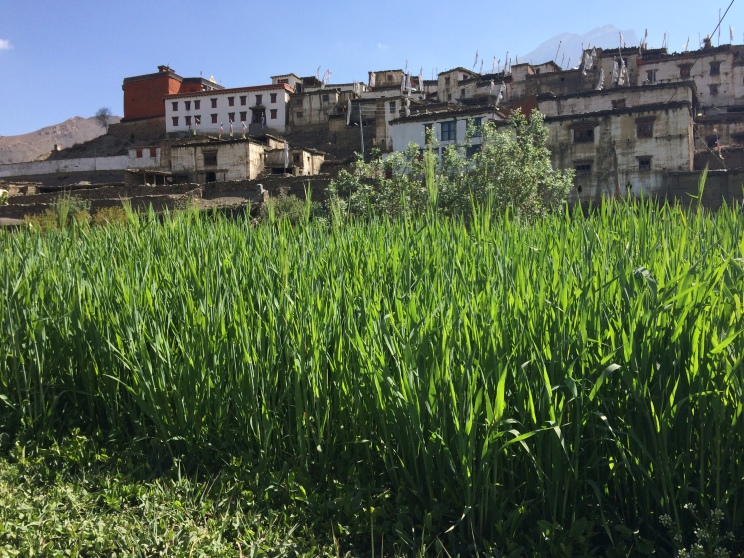 There is a reason the Annapurna Circuit has been on Jay’s bucket list for almost two decades, it’s known as the best long distance trek in the world making a perfect circle through the Himalayas crossing tropical climates of the Hindu villages in the foothills to an arctic climate at Thorung La Pass at 17,700 feet to desert climate and Tibetan culture in the Manang Valley. The trail is much shorter than it was historically, because of heavy construction and population growth in certain areas, but it’s still, in my opinion, a great long distance trek that I would highly recommend to anyone who finds themselves in Nepal.

When and Where to Go 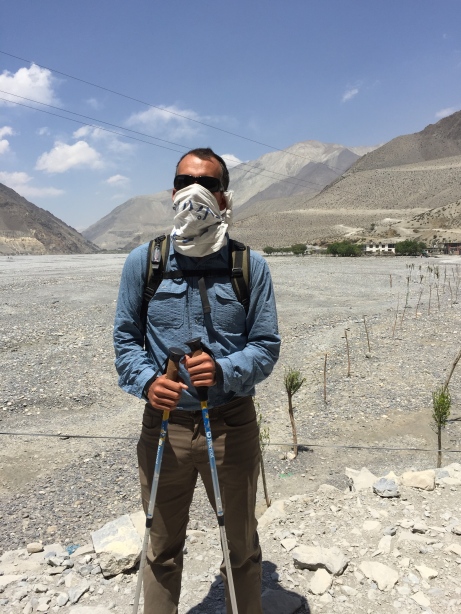 We arrived in Nepal on May 4 and began our trek on May 8. Most guidebooks suggested not to  trek that late in the season. Shoulder season is too hot, the monsoon is coming, the mountains are hazy, etc. It was a little on the warm side the first few days of the trek, but not unbearable. It rained on us one afternoon the entire trek. And as you can see from the pictures, we saw all the 8,000-meter peaks we could handle as they broke through the crystal clear blue sky on most mornings. If anything, I would highly recommend trekking in early May. In comparison to peak seasons, the traffic on the trails was also minimal!

As I mentioned earlier, we started in Besishahar and ended our trek in Jomson rather than completing the whole loop to Pokhara. I would recommend doing the same, and perhaps even taking a jeep further up on the trail and starting in Syange or Tal. Most of the trek from Besishahar is dirt road with quite a bit of traffic. We found the trek trail to be much more enjoyable. If you shorten the route, it could open up time for you to add hikes to Annapurna Base Camp and Poon Hill. Here’s a quick breakdown of our itinerary: 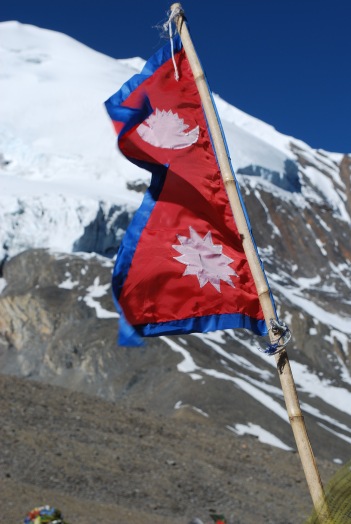 To Guide or Not to Guide

We went back and forth on this. Jay was confident we would be just find without a guide, but me, being new to trekking really pushed to hire one. We found an awesome guide and porter through Intrepid Travel Nepal for a fair price. In hindsight, we could have saved over half of what we spent doing it on our own and would have been perfectly fine. Costs typically are limited to: trekking permits and food – most tea houses won’t charge you their most basic rooms as long as you eat meals there. A guide is about $35 per day and a porter is about $25 a day. Another option would be to hire just a porter or a porter/guide. 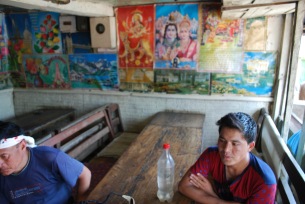 We bought most of our gear in South Africa. I bought new hiking boots, which I wore on several hikes around Cape Town a week before we left for Nepal. (I still managed to get a few large blisters on day two of the trek. Thanks to moleskin, I didn’t have any other issues the rest of the time). Other gear purchased before arriving in Nepal included: trek pants, lightweight tee, wool socks (medium and heavy), thermal underwear, and a down jacket.

Once we arrived in Kathmandu, I purchased a day pack, water bottles, iodine for treating our drinking water on the trail (this helps eliminate waste on the trail), cipro (never know if any tummy issues will arise on the trail!) trekking poles, stocking hat, gloves, headlamps and toilet paper. We found all of the items for relatively cheap (knock-off brands) in Thamel; however, North Face has a store as well if you want to put in the extra money. 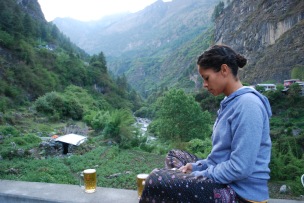 Don’t worry about packing snacks. You can find just about anything you need along the trail. Including beer. Keep in mind the higher up you get, the more expensive things will cost. On a too much information note (sorry male readers), I unexpectedly started my period on the trek with nothing with me for it. I wasn’t able to find tampons, but there were pads for sale in most shops. Talk about an embarrassing conversation to have with my guide when he asked what I was popping in and out of shops looking for!

Teahouses are pretty basic along the way and there are a lot of options no matter which itinerary you choose to follow. Pack a sleeping bag (ours came with our trekking package through Intrepid) to use on the wooden cots provided in each room. For a little extra money, some teahouses offer attached bathrooms and showers, but don’t count on it. Most places do offer hot water (some will charge you extra for it, but once we got to our last two stops before the pass, neither teahouse even had a shower. The food is really good at most teahouses made with super fresh ingredients. Do have the Dhal Bhat. As our guide would say, “Dhal Bhat power, 24 hour, 2 weeks, no toilet no shower!” I’d recommend indulging in a cinnamon roll in Manang as well as the various types of tea from ginger to lemon to mint teas. Some teahouses have wifi for free and some for a small fee. Most have places for you to charge your gadgets too, but consider bringing back up power sources (solar works great) for the last two days over the pass if you want to use your phone to take pictures!

What’s up next for thewunderbug? Pokhara, paragliding and the Dream Center! Check back in a few days as I wrap up our time spent in Nepal. Cheers!